Flying into Amman, i never thought i’d be getting the chance to visit a country that has been on my bucket list since i was young. While flying a lot, i get to see and experience some of the most amazing places but not always wonders of the world due to location, time and energy, however this time i was determined to get myself to Petra!

With the opportunity to visit a place of dreams on only a 3 day trip, which meant tired eyes all round. One of my closest friends was just as determined as myself to come with me and see it with our own eyes.

As a holiday, you will have more time to plan your trip around Jordan and i wish we had had longer to explore the city as i’ve heard beautiful things but we had to pick one and neither of us were about to turn down the offer of something that we may never get to see again.

As we had arrived late the first evening, we decided to grab some dinner and a night cap before getting our beauty sleep as you have to be up pretty early to start your journey.

Petra from Amman is around 3 hours in the car…. yes we had a slight heart attack too when we found out but again, nothing was stopping us. As a group we found a great company owned by Tareq Shaqlos who runs ABU ZAID SHOQLOS which you can find on Facebook. Depending on how many there are of you, Tareq and his men will pick you up from your hotel, drive all the way to Petra with a half an hour stop off for a coffee and snack, then wait until you have finished in Petra and drive you all the way back again, all for a great price. When the weather is warmer, they will also drive you to the dead sea where you can scrub in natural mud and float the afternoon away. They were efficient, charming and so kind and gave you all the information you might need about their beautiful country.

A lot of tourists will usually travel around the country and stay in the city of Petra so that it is easier for them to get too, they have longer to roam and explore, and what we found out after trekking 35,000 steps in 4 hours was that they could then slump onto their comfy hotel beds out of exhaustion instead of travelling back home for 3 hours HAHA! So i would definitely suggest that option if you have the time.

For that reason we set off at 7 am so that we would have all day in Petra and be able to really experience all parts. Be organised and pack some snacks and lots of water. Some entertainment for the journey as there isn’t much to look at once you leave the city HAHA. This month was pretty cold in Jordan so depending on when you go, make sure you pack a jacket and scarf and wear some comfortable shoes for walking around.

Finally, we made it to Petra! For tourists, the cost of entrance is £50, but i personally don’t think there is a price for an unforgettable experience. For that price you can walk for as long as you like, see as much as you can, sit and have a local coffee and watch the world go by and take it all in.

You start your experience by walking through some souvenir stalls and saying hello to the locals. You start taking in the views of beautiful natural rocks that have been shaped over the years. You soon come to what is called Al-Siq. A 1.2 kilometre – long gorge which takes about an hour to walk and leads straight the city’s most elaborate ruin, Al Khazneh, or The Treasury. 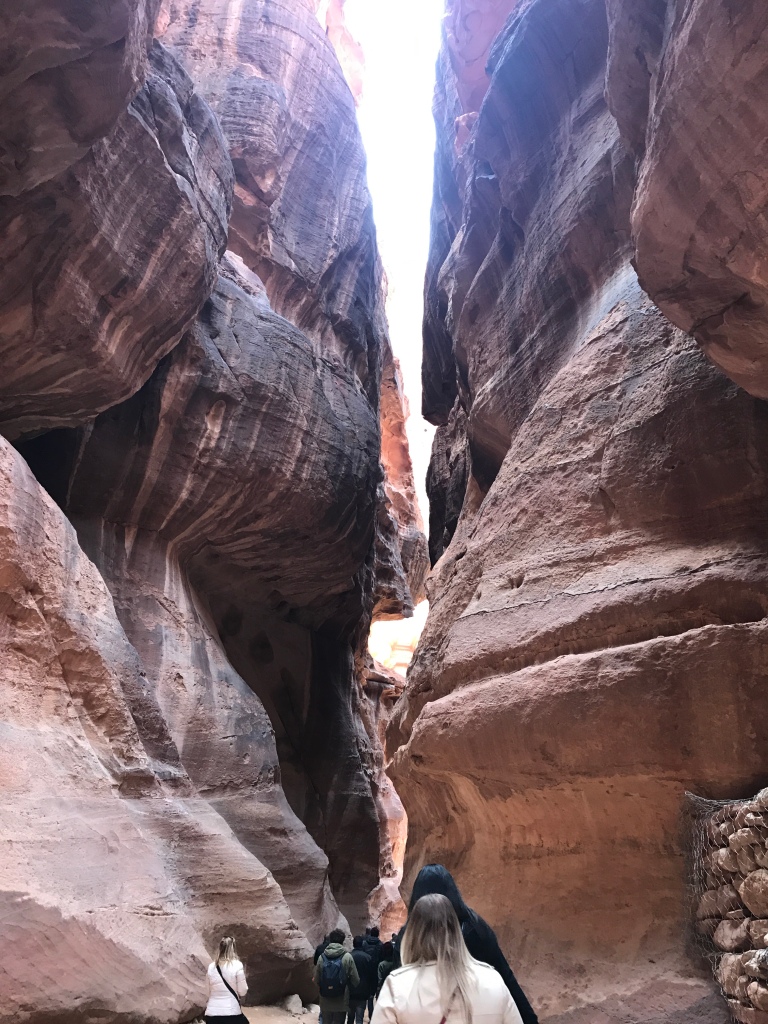 All you do is look up while walking, the red stone, almost 182 metres high, is shaped by weather creating the most beautiful shapes and shadows. When the sun is shining, it makes everything so much more beautiful. At this point you start to see small carvings of where the Nabateans (who originally founded and lived within the carved city) started shaping buildings. Soon, you come to the end of the narrow passage which unveils the most stunning piece of stone carving you could imagine!

All of the Instagram and social media pictures taken of this beauty can never take away how it feels to actually walk up and see the treasury in person. It is so grand, so peacefully stunning, just stood there, even with all the hustle and bustle of tourists taking pictures and bedouins haggling a price, your eyes are stuck on this ruin. The fact that it was believed to have been carved around 5th century BC and still makes people stop in their tracks and gasp, it is truly a wonder of the world. Anyone that goes to see it should take a moment to stand alone and take it all in. 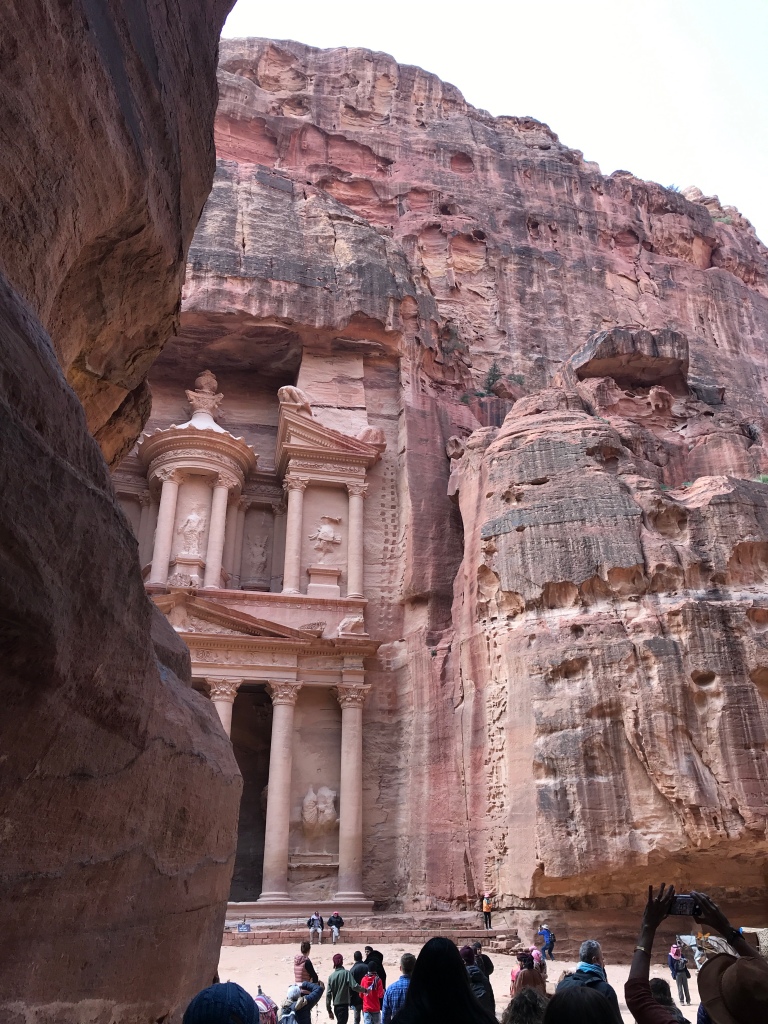 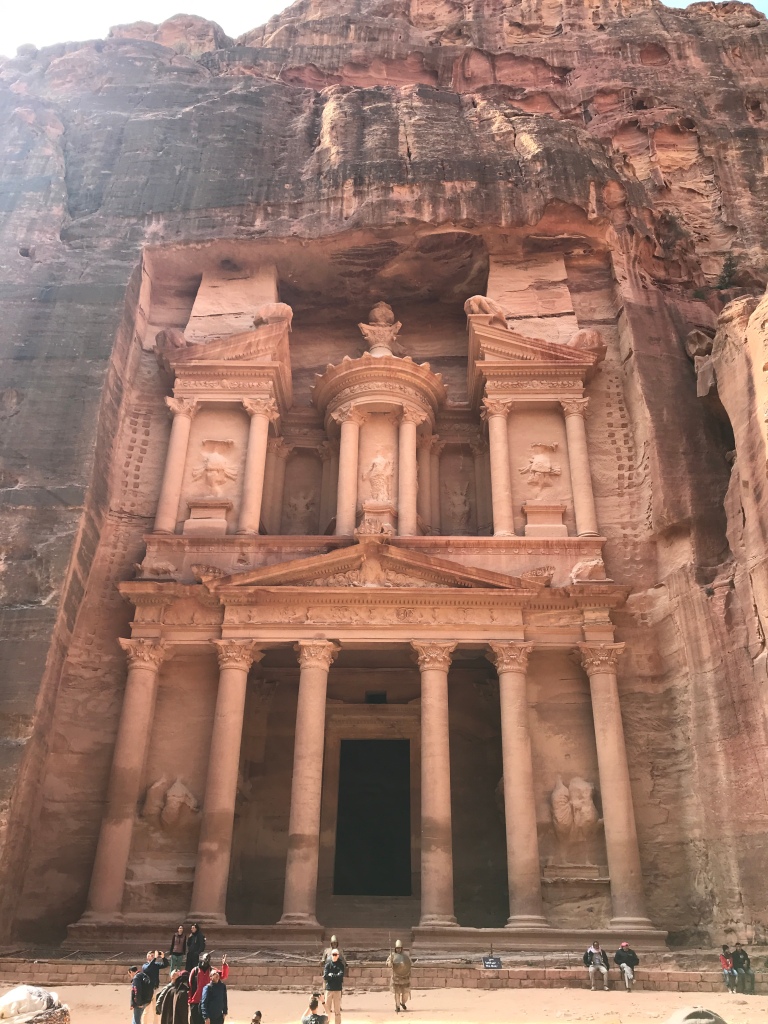 After filling up the photo album of this gorgeous ruin, we chose our route and decided to head off in search of some more jaw dropping sights. As you walk, the bedouins ride past on their horses and donkeys, even camels waving hello and welcoming us to their city. Almost pirate looking, as they wear cole on their eyes to stop the sand from irritating and cloth around their heads and neck to keep out of the sun but they are very charming and extremely witty. You may end up saying “no thank you” over a thousand times HAHA but they are very respectful and that usually happens when you hit a tourist spot.

As you walk past the The Street of Facades and The Colonnaded Street, you wonder what life would have been like so long ago. Almost 20,000 civilians lived here when the city was thriving. 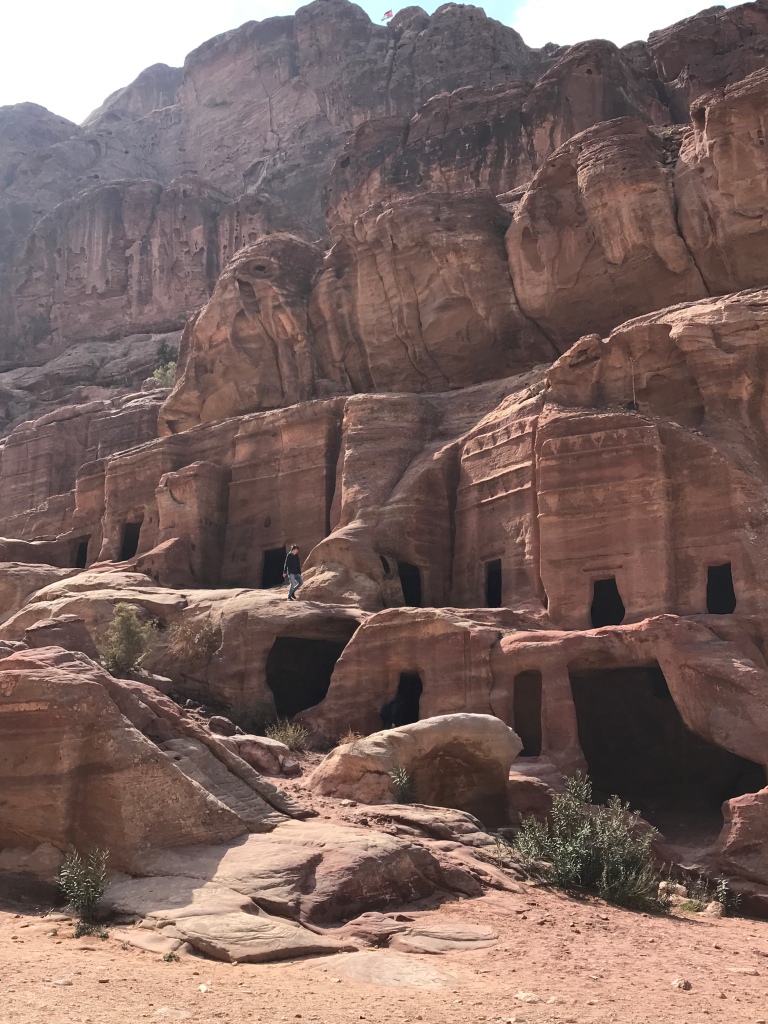 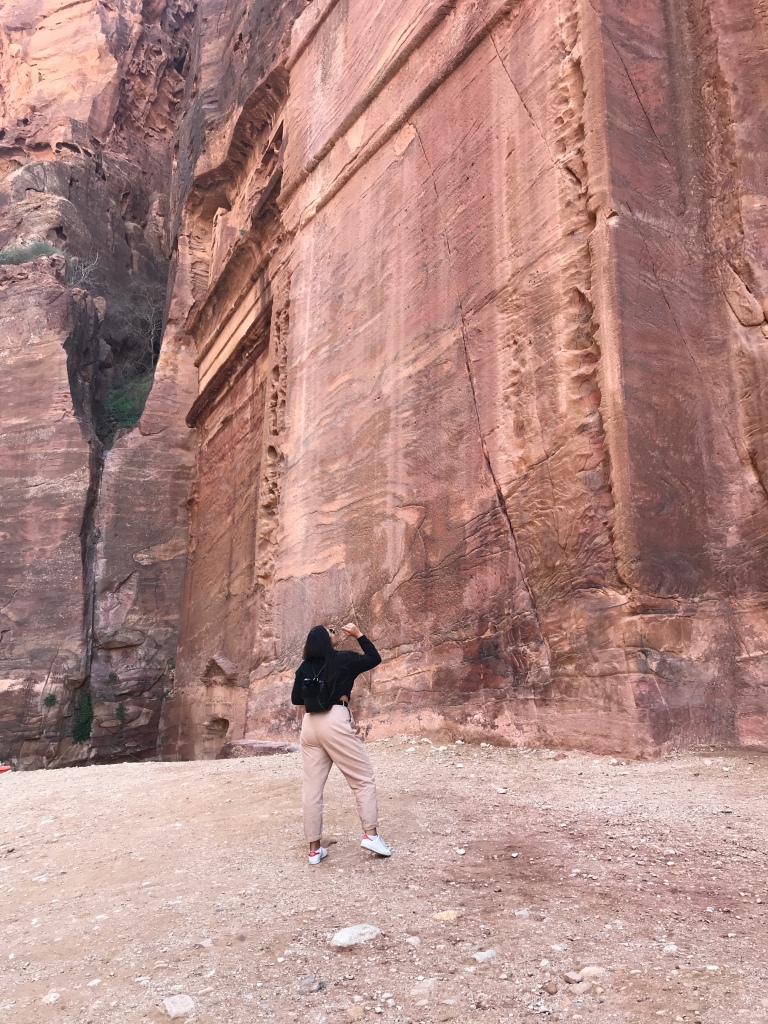 As we head north, we walked further and further into the Shara Mountains and up closer towards what we had decided was going to be our final goal, The Monastery. Not realising that this last trail would be the hardest thing i’ve ever done, we continued on. I was clearly too busy focusing on the camels to realise what was soon going to happen HAHA. 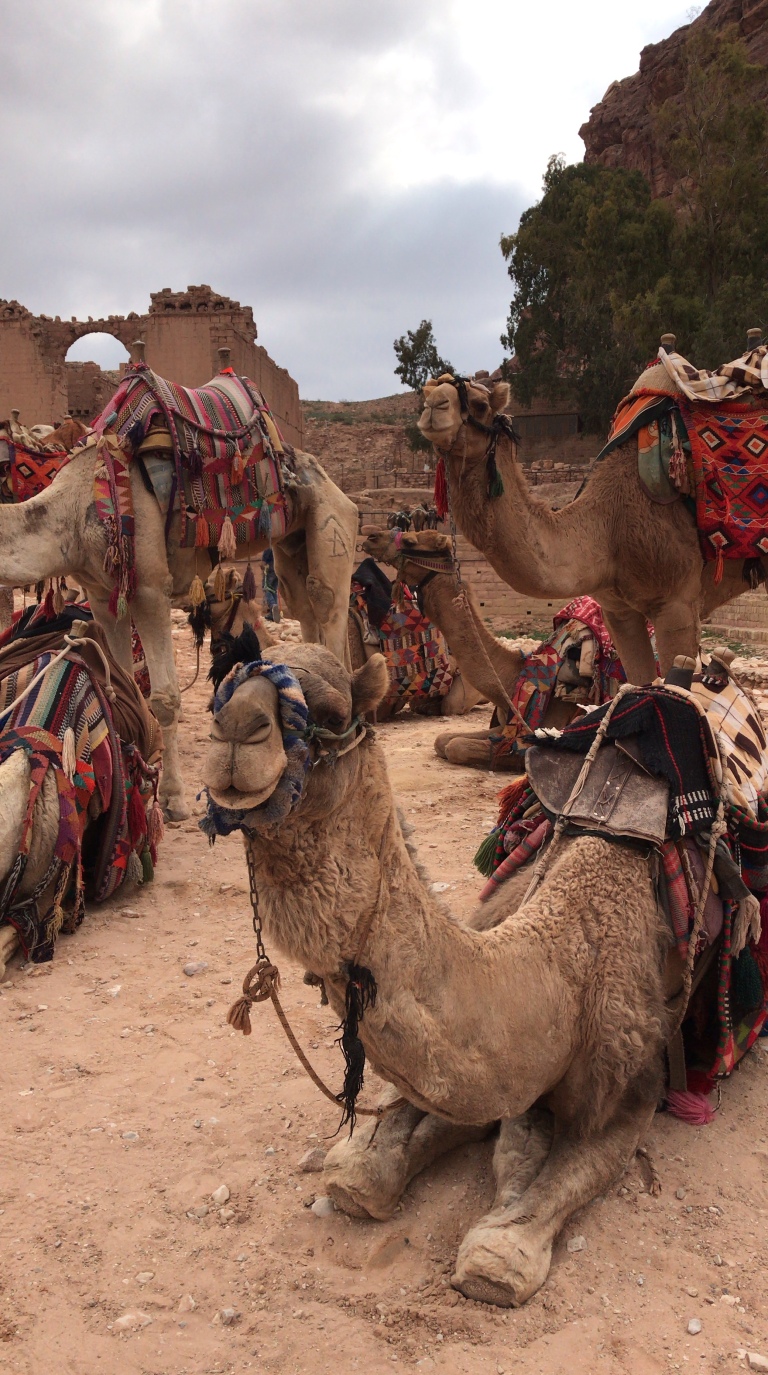 One the way, we found The Lion Triclinium, which is so-named due to the two lions carved on both sides of the entrance. When you climbed up to it, the view when you are propped up against it is just beautiful, you can see how far you’ve walked and beyond. It’s another moment to stop and take in exactly where you are.

We continue walking, or should i say climbing, and climbing, and climbing. Uneven steps, donkeys coming down, and locals trying to sell you souvenirs. All i will say is i didn’t read the trail map. AlDeir, or The Monastery measures 47m wide and 48m high and was built as a Nabatean tomb. Little did we realise, it’s around a 3km round trip and that we would be climbing up over 10,000 steps to get to the top. Yes i panicked after we got half way HAHA.

We would pass the locals on their stalls, and families herding their goats on the rocks and they would shout “you’re doing so well” and “keep going you’re almost there”. Great motivation but we were no where near the end HAHA. If you’re not a fitness fanatic like myself then you are going to find it extremely hard. At this point we were very grateful for the cooler weather as i’m not sure we would have made it in 30 degree heat. You see so many different walks of life travelling up to see the monastery, from so many different countries and that makes you realise that not getting to the top isn’t an option. The view will make it all worth it.

It’s funny how your mind works when you’re determined to do something. I fell behind my group slightly and soon learnt that i had to go at a  pace that worked for me, walk a little, stop a little. A group of american ladies, in their 60’s, were on a mission to get to the top and some how brought me into their group. I can’t lie and say that their age didn’t force me to work harder as i was half their age and struggling just as badly as they were, but it was just the motivation i needed, and also the mental voice telling me “I’m going to have a great butt after this” HAHA.

“50 more steps! You’re so close”. That was the moment i remember thinking “I’m going to finally make it”. Everyone has achievements in their life, whether they’re silent or out there for everyone to see. I never thought that this would be one of mine. I had pushed my body to another level of fitness that i’d never done before, not given up when i had many moments when all i wanted to do was sit and sip tea with the locals. I believed in myself, and who would thought that a trip would also equal to a new belief and confidence in myself.

As i turned the corner and saw this magnificent ruin glistening in the sunshine, on top of the mountain that i had just climbed. It was a very emotional moment for me. What was even better was that my group were sat on a rock waving and cheering me on that i had made it. There was no embarrassment that i had made it up last out of my group, no judgment from the people i had never met before that i was struggling. Everyone there had the same goal, no matter how long it took them. 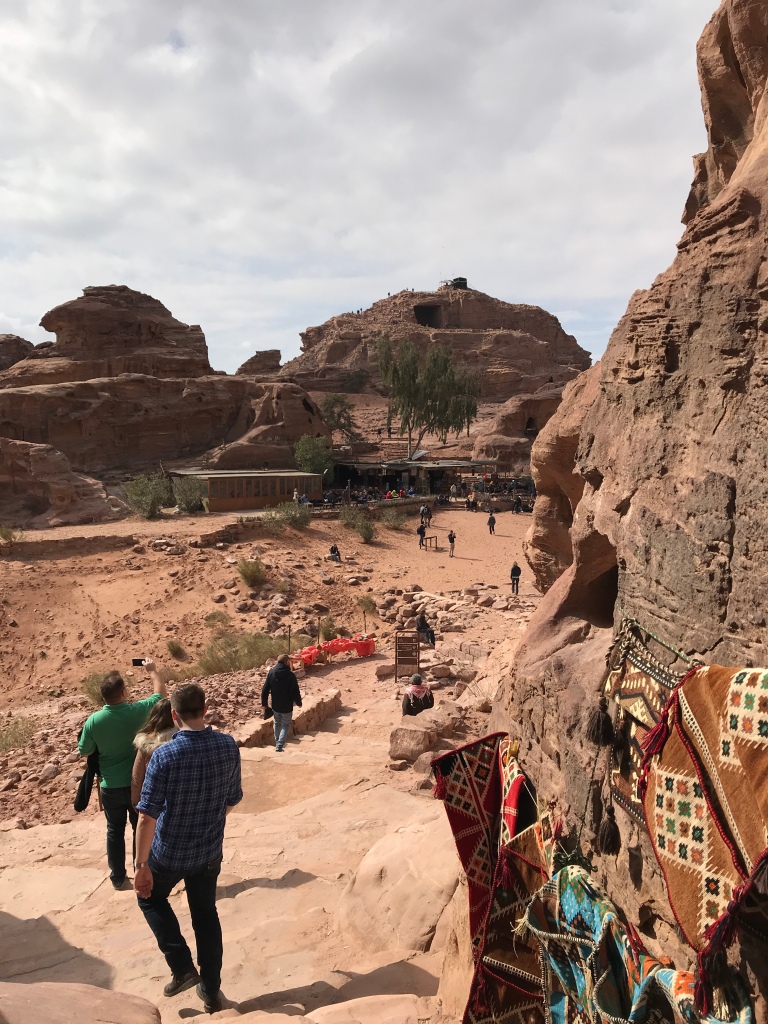 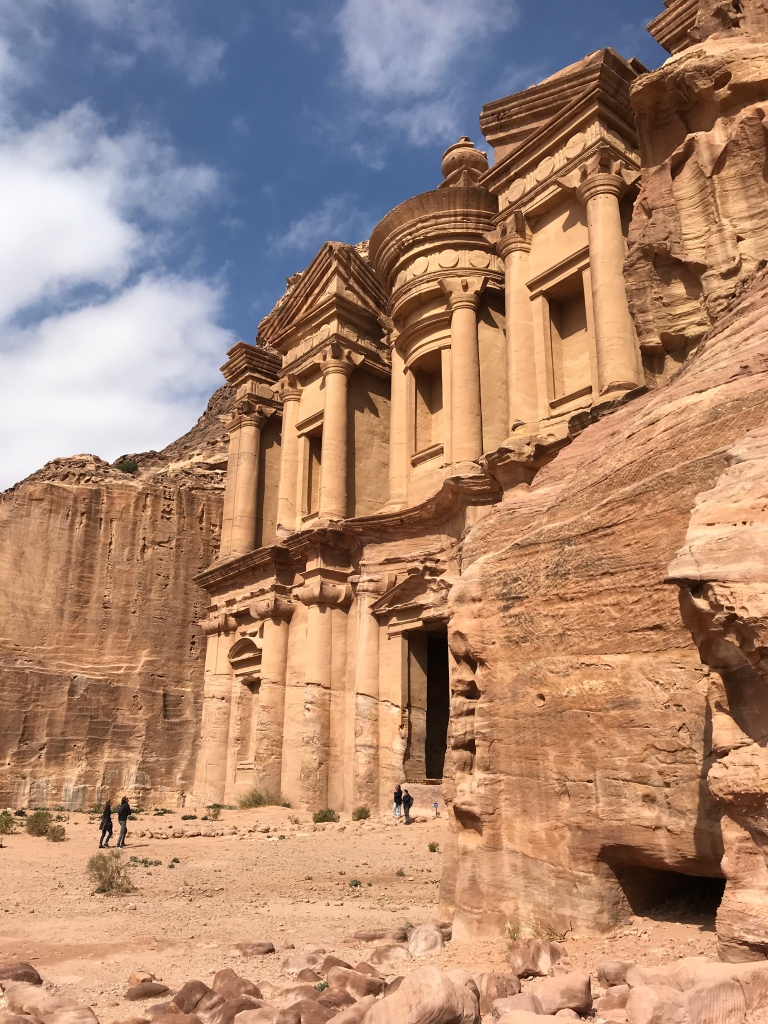 And of course, after making sure this moment was captured forever, we sat down and admired the view, and the journey that we had taken to see it.

And even met a beautiful dog that we named Bob that just sat with us soaking up the sun as we enjoyed the view. 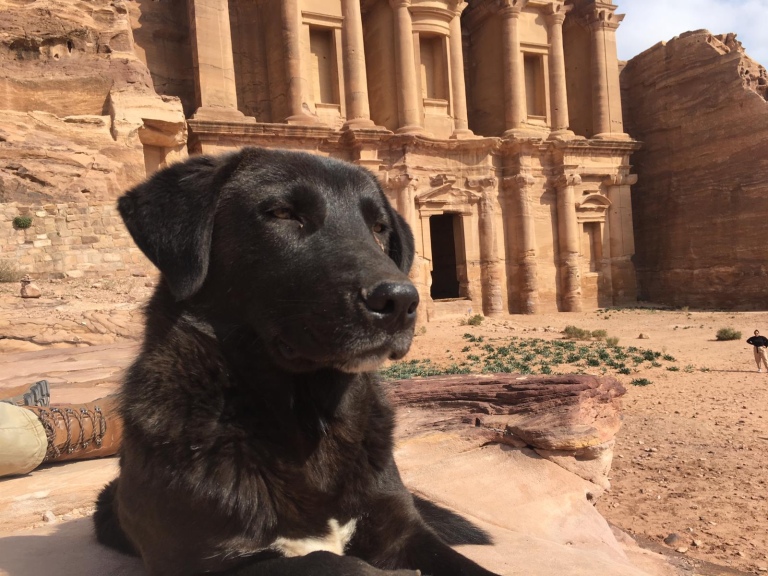 This day was spent with one of my closest friends, so to be able to experience that with her too was brilliant. We will be able to talk about the laughs, the almost cries and the tough points that we both motivated each other to complete.

Spend this day with someone who appreciates the old, the history and the effort it takes to go and see something you may never get to see again in this lifetime. And if you haven’t got one of those people, then make sure you go by yourself. If it has always been a dream, then make sure you fulfil it and go! 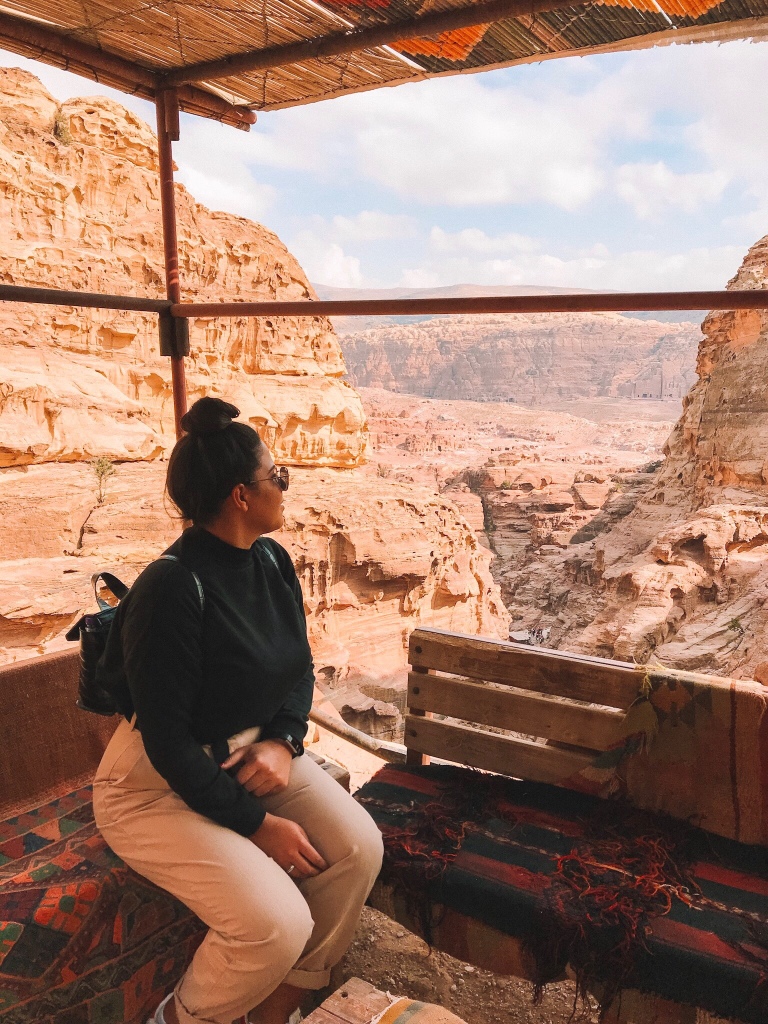 One thought on “JORDAN”